CITIZENS COMPASS– TO assure members of the public that his health is in order, Ondo State Governor, Rotimi Akeredolu has posted his pictures at an event he attended on Tuesday night.

This came few hours after the Ondo State government acknowledged that the Governor was ill.

The Governor who posted the pictures to his official Twitter account said, “Earlier today, I met with candidates from our great party, APC, and other Stakeholders of @OndoApc in preparation for the forthcoming general elections.

“I seized the opportunity of the meeting to charge the party leaders & members to work hard for the victory of the APC in the state.

“At the meeting, I also announced the dates for the party’s Senatorial campaign rallies in the state which is as follows; the Ondo South Senatorial rally will hold on January 23 in Okitipupa, while the rally for Central Senatorial district will come up on January 30 in Ondo town.

“The North Senatorial Campaign rally will be held on February 6, 2023, in Owo, Owo Local Government Area of the State.

“I am very confident that our great party, APC will emerge victorious at all levels. APC remains the party to beat in the state.” 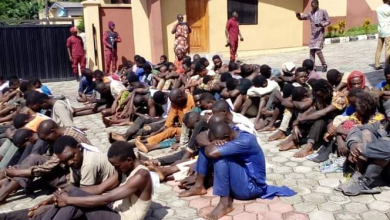