OPERATIVES of the Rapid Response Squad (RRS), Lagos State Police Command have recovered an AK – 47 and a pump action gun loaded with 8 rounds of live ammunition in Ajah area of the State.

A statement signed by the Spokesperson of the Command CSP Adekunle Ajisebutu said the guns were recovered at about 1345hrs. yesterday with a hood and plier inside a black sack. The team of officers on a special assignment in the area had received intelligence about the suspicious substances before detouring to check it out.

It is strongly suspected that the guns and other exhibits must have been abandoned by armed robbers who were prevented from carrying out their criminal intention by the constant presence of the police in the area.

The Commissioner of Police, Abiodun Alabi commended the RRS Commander and his men for the recovery and the strategic informant who provided the information leading to the recovery.

The CP has, however, directed that a discreet investigation should be carried out by the Command’s Special Squad with a view to arresting the suspected robbers who could have used the weapons to cause serious harm to innocent people in the State. 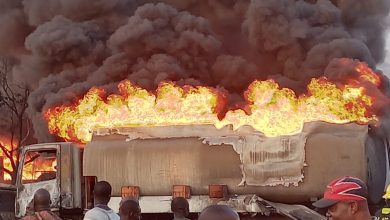 Fire outbreak as truck bursts into flame in Lagos 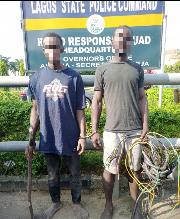