AT LEAST, two persons have reportedly died while some were injured yesterday, in Ikotun area of Lagos, during the primary elections of All Progressives Congress APC, for the House of Representatives in Alimosho area.

The incident reportedly occured at about 3pm, on Friday, 27 May, 2022, at the Secretariat of Ikotun/igando Local Council Development Area, where the primary elections were held.

Eye witnesses’ account said there were two factions of the party for the two aspirants for Federal House of Representatives seat in Alimosho Constituency.

They were Prince Idris Balogun popularlly known as Oluomo’ and Ganiyu Ayuba.

‘Oluomo’ was said to have emerged from Orelope faction while Ayuba was from Enilolobo with both having their loyalists on ground.

An eye witness, Tunde Adamson said the election started smoothly until some armed thugs arrived the venue, disrupted the process and thereafter declared their candidate as the winner of the election.

“This resulted into crises as dangerous weapons were freely used despite the presence of security operatives,” he said.

It was learnt that one of the factions gained upper hand and stabbed two of its opponents simply identified as Zuri Boxer and Ogunlaye to death on the spot.

Ogunlaye was said to be the Zonal Chairman, National Union of Road Transport Workers NURTW, in Alimosho.

Vanguard gathered that he engaged in fracas simultaneously with two of his opponents but he attempted to escape through jumping the wall of the Secretariat on noticing danger, unfortunately, he got stabbed to death.

Similarlly, the second victim was also stabbed to. death.

At press time, there was apprehension in Ikotun, Igando, Egbeda and their environ over possible reprisal attacks in the area. 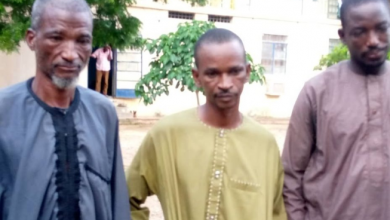