The event took place at Omo-Onile area in Macaulay at about 11am.

The first speaker for the day was Chief Imam of Ilado Odumade/Sholumade Hijra Central Mosque, Jamiu Oshodi who preached for unity among all.

He applauded the good works of the joint CDAs for organising the maiden edition assuring them of neccesary support whenever the need arises.

The need to beef up security in the area topped the agenda for discussion as the event had in attendance, the Divisional Police Officer, DPO, Ikorodu Division, CSP Aderemi Balogun, Lagos State Neighbourhood and Safety Corps (LNSC) and Igbogbo/Baiyeku Joint Security Taskforce ably led by the Chief Security Officer, Dare Igbasan popularlly known as Agali.

The Vice Chairman of the Council, Hon Nurein Maja admonished the residents to be law abiding, security conscious and actively participate in community development activities.

The CDAs requested for their own Joint Security Taskforce under the Council’s authority and this was granted in the presence of the Chief Security Officer.

The interactive session of the programme centered on clearing of bushes around the community, checkmating of uncompleted buildings to ensure that hoodlums do not use such as hiding places.

Others are that residents should desist from exposing themselves to danger by posting their successes and achievements on social media as this may expose them to criminal elements.

They were also charged to pay security levies and ensure profiling of all security apparatus in their domain.

The residents were exposed to the fact that criminals are within and it is necessary that they should be fished out of their hiding places.

The event harped on the fact that suspected criminals are usually hanging around various communities to sabotage the effort of the law enforcement agencies.

Also, it was discussed that people of questionable characters should either repent of quit Macaulay and its environs as security of the area is paramount.

The meeting condemned the acts of cultism, Advanced Fee Fraud, social vices, rape, robbery and other types of criminal acts as it is compulsory for residents to know their neighbours for security and developmental purposes.

Lanre Obanisola, the Secretary, Community Development Committee (CDC), Zone 4, said the programme was the right step in the right direction urging the organisers to sustain the tempo. He said, “The Joint Macaulay CDAs has set the pace in the zone and other areas should emulate such.” said the Zonal Secretary.

He charged residents to be security conscious and live peaceably with one another. He said, “I hereby congratulate the joint CDAs in Macaulay for distinguishing themselves in the zone. The leadership of these CDAs deserves accolade for this giant stride. I urge you all to be law abiding towards the development of your area,”

The Divisional Police Officer (DPO), Ikorodu Division,, CSP Aderemi Balogun urged residents to adopt the measures of “Know Your Neighbour”, in order to reduce criminality in their environment.

Earlier, Abdulganiu Olalemi who spoke on behalf of the CDAs chairmen said the meeting was pertinent due to security challenges faced by the community which has threatened peaceful co-existence in the land.

He highlighted the importance of the meeting to include roles of residents in curbing insecurity.

“It is my sincere hope that the meeting will not only open our eyes to community policing but will foster unity amongst residents in each CDA and Macaulay at large.”

In his vote of thanks, Prince Femi Adelaja, the Chairman, Odumade/Sholumade Phase 2 CDA said the security tips will be out into use.

Representatives of the indigenes, the Baale of Ilado, Chief Sarafadeen Tijani and Chief Oluwo Solumade were also in attendance.

Similarlly, representatives of the Hausa and Igbo communities were in attendance.

The Sholumade family seized the occasion to donate space for building an office for security perssonnel. 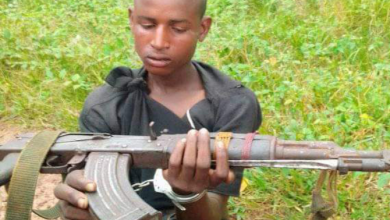