CITIZENS COMPASS– A commercial motorcyclist popularlly known as Okada rider, has allegedly stabbed his passenger to death over N100 fares in Agbado area of Lagos State.

The Okada rider, identified as Yusuf Ogunmefun was said to have stabbed the deceased, Balogun Musa following a disagreement over the fares.

The incident recently occurred on AIT Road and residents have handed over the Okada rider to the Police in Alagbado Division for interrogation..

The deceased, a welder popularly known as Baba Rokiba, was allegedly stabbed to death for refusing to pay N100 difference charged by the rider after he alighted at his destination.

Eye witnesses’ account said a Good Samaritan who witnessed the disagreement offered to pay N200 to settle this but this was allegedly rejected by the bike man who insisted that the payment must be made by the passenger.

Along the line an altercation was said to have ensued which led to the rider stabbing the passenger who later bled to death having been rushed to a private hospital..

At press time, the remains have been deposited in a morgue while the suspect is facing interrogation at the AIT Alagbado Police Station. 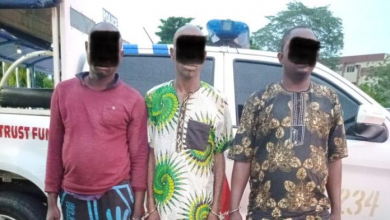