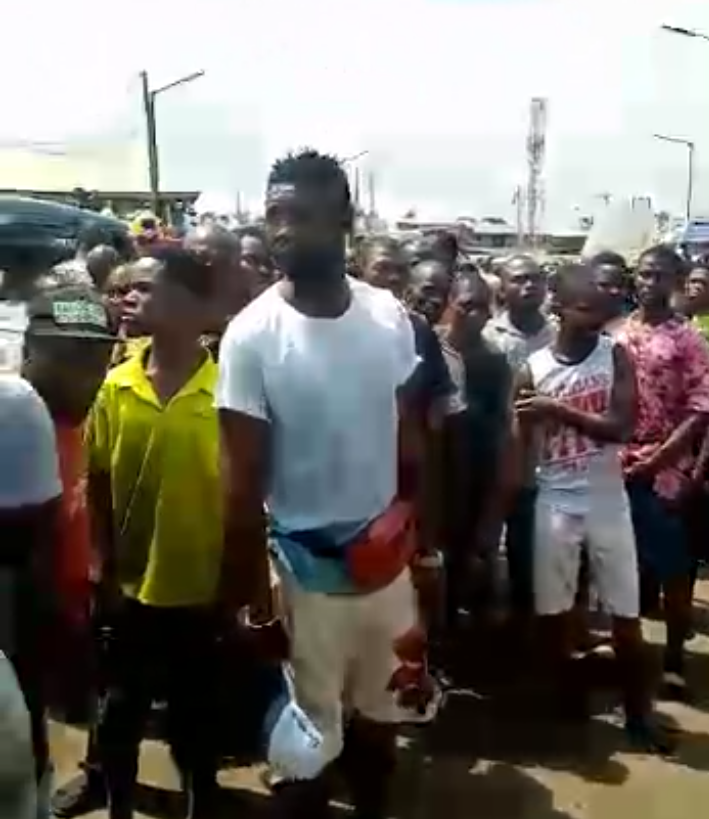 THE leadership of Aguiiyi Ironsi International Market Traders Association, a unit of Ladipo Market in Lagos has vowed to resist intimidations by men of Airforce on its members.

This follows the death of a trader and infliction of gunshot injuries on three others by men of Airforce on Tuesday.

At a joint  press briefing on Wednesday, at the secretariat of Ladipo Market, the chairman of Aguiiyi Ironsi International Market Traders Association Chief Emmanuel Mbamara disclosed that one person was killed, while three persons sustained high degree of gun shot injury.

The traders said they will deploy legal means to fight their course in order to end incessant Intimidation and harassment of its members by military personnel.

The group also said a strong worded petition would be sent to the Chief of Army Staff, the Inspector General of Police and the Governor of Lagos State on the incident to seek justice.

Mbamara, whose unit  the clash started from said it was unfortunate for Police to claim nobody died during the clash in the market.

The Chairman identified the deceased as Felix Onu, (28) and the injuredl as Chidinma Ifeanyi, Makuo Ekwuna, Ifeanyi Enyi and Chikezie Nlewem who were receiving treatment at the Lagos State University Teaching Hospital.

He said the crisis occurred when an Airforce personnel returned a Kickstarter he bought eight months ago for a replacement for malfunctioning or a refund of money, which was resisted by the seller.

According to him, he was somewhere when the information reached him, but rushed down by the time he got to the market, it was already a war zone where bullets were flying around and people where scampering for safety.

He said: “Immediately I entered into the market with the president General, we were able to calm the traders with the assistance of the DPO Isolo and because of curiosity, I went to my unit and addressed my colleagues and after talking to them, I received a call that the Airforc personnel have been arrested by some military men at the Army resettlement centre,  when I got there, their commander was saying they acted on self defence that it was the traders that first attacked them which was untrue.

” When I checked their operational vehicle, two of our traders were held down and the commander begged we should followed him to his office at Airforce base, claiming it was mandatory for their boys to shoot whenever they are in danger and I told the commander to shoot me as well because he was already taking side and that was how we left the office.

“It is becoming of the military to come into the market to threaten us after buying and found out that what they bought was not functioning well, we only gave a warranty for any goods bought in the market for only one week.”

Mr .Ajuluchukwu Ezeanyo, a witness who was at the scene when the crisis started said it is law in the market and well written on the board that whenever a military personnel comes into the market to buy things they don’t collect tolls from them.

He said what caused the crisis was about a Kickstarter that was sold to the Airforce personnel eight months ago, only to returned it for not functioning well.

“Some other executive members and I were at the Taskforce office in the market when the Airforce personnel who bought the Kickstarter came dressed in mufti with a friend, while we were attending to some customers, he started ranting that what they sold for him was not good and I tried to talk to him with another person, but he got angry and said we are going to know him, before we realised what was happening, two patrol vans came into the market, one of us Chikezie’s head was hit with an iron because he did not open gate for them on time.

“It was in the process I started begging them but they refused to respond and this has being their way of life. Before I realised what was happening, they have started shooting sporadically and I knelt down begging them to stop shooting because the casualties would be much in the process but they ignored me.

“Felix and four others sustainained injuries in the process and I was the only one in the buffer zone, begging the operatives and the traders.

“Some people who were recording their activities were also shot at, one of the Airforce men also pointed gun at me and threatened to shoot me if I dare say anything. After they were not done with shootings, they hit people with planks and iron, we are law abiding citizens and we didn’t burn their vehicles as claimed in some reports.”

The President General of the market, Mr Jude Nwankwo said military men have been troubling them in the market for a long time.

” This is the time we are going to stop selling goods to Military men and we have also shutdown the market in honour of our brothers who died and those who sustained injuries. We have endured it enough,”

Meanwhile, the Commissioner of Police, Lagos State, Hakeem Odumosu insisted nobody died in the crisis.

The Police boss while parading suspects at the command headquarters, Ikeja on Wednesday, insisted that nobody died in the crisis between the traders and the Air force men.

Odumosu said it was only three people that sustained injury during the crisis and they are receiving treatment at the hospital, while the command is also working with the Air force authority to arrest the personnel  for taken laws into their hands.

57 migrants drown in shipwreck off Libyan coast -U.
24 hours ago