The suspects have been remanded in Badagry Correctional Facility in Lagos.

The incident occurred at about 12:30pm along Robinson Gbadu Street while the officials were on official duty to the area.

The officials were said to be rescued by the Taskforce after a distress call.

It was learnt that they were on joint routine monitoring and enforcement for compliance activities on structural stability of buildings in the area before the owner of an illegal when the owner of an illegal gas station under construction allegedly mobilized thugs and miscreants to prevent them from carrying out their official assignment.

The gas station in question owned by one Mr Maroof Owonla popularly known as ‘Kaka’ was said to be constructed without permit or approval by the state government just as the officials made frantic efforts to halt construction unfortunately they were attacked by thugs and street urchins stationed around the location.

It was learnt that four official vehicles were also damagedwhile bodily injuries were inflicted on the officials including the security details attached to the team to carry out the assignment.

Mobile phones, cameras and personal belongings of the officials were seized by the miscreants and the site workers during the attack.

The Taskforce Chairman, CSP Shola Jejeloye frowned at the incident  describing it as unlawful and high-handedness which will not be tolerated in the state.

According to him, the incident could have been avoided if the owner of the gas station who mobilized the thugs and miscreants  in the vicinity had towed the line of best practices before registering his grievances.

He said, “After receiving distress calls from members of the public and other officials of the two Agencies, operatives of the Lagos State Taskforce swung into action and moved to the location to rescue and prevent any further break down of Law and order. The said Maroof and some Armed thugs who were involved in the fracas tried to carry on with their unlawful act but were subdued and arrested by the Taskforce operatives for questioning.

“Officials of the state government were carrying out their lawful duty but were attacked by the aggrieved owner of the said property. That is not acceptable anywhere in the world and we will make sure everyone involved will be brought to book. The Government spends millions of Naira acquiring these vehicles which were vandalised by these thugs,’’ he said.

In a related development, a a 33 years old suspected fake Soldier,  Idris Lukman, has been apprehended by the Taskforce.

Lukman was arrested along Palmgrove/Onipanu area of Lagos while operating a commercial bus, popularly known as ‘Danfo’.

He was said to have parked at illegal Blbus stops to pick and drop passengers before being accosted by the operatives of the Agency for obstructing traffic along that route.

He was said to have claimed to be a soldier and pulled out a fake identification card which was identified immediately by the officers to be fake and he was apprehended on the spot.

CSP Shola Jejeloye urged Lagosians to continue to be law abiding and think twice before taking any rash decisions to avoid breach of peace, bodily harm and damage to property that is regrettable.

He warned all those impostors parading themselves as serving uniform personnel to desist from doing so henceforth or be arrested and prosecuted via a court of competent jurisdiction.

All the suspects including the owner of the illegal gas station under construction have been charged to court accordingly.

Jejeloye said the owner of the illegal gas station under construction has been granted bail but has not yet met his bail conditions thus he has been remanded in Badagry Correctional Facility till the bail conditions are met. Meanwhile, the case has been adjourned till 20th April, 2022. 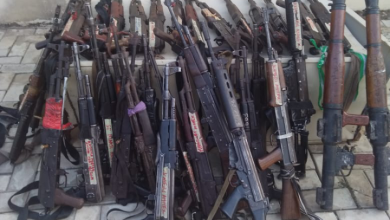