GUNMEN have reportedly killed a male traveller in Ekiti State abducting his wife and daughter to unknown destination.

The victim, whose identities are yet to be ascertained, was said to be travelling with his wife and daughter in a Lexus 330 Sports Utility Vehicle (SUV) between Ewu-Ayetoro-Ekiti Road in Ido/Osi Local Government Area of Ekiti State, on Friday evening when the gunmen rained bullets on his vehicle.

The Police Public Relations Officer, Ekiti State Command, Sunday Abutu, confirmed that three people were in the car at the time of the abduction.

It was learnt that the passengers, who were said to be guests at an occasion in the area were returning to their destinations when they were waylaid by some bandits.

A source said: “The man and the family were returning to their base when they were waylaid. The victim was shot in the head and chest.

“They didn’t take the vehicle, they only left the corpse of the man and other people in the vehicle were taken away.

“There was pool of blood inside the Jeep and this made people to suspect that those who did the work were kidnappers”.

The Police Spokesman added that the sympathizers could not do much to save the victim, as he died on the spot.

“The report we got was that, the family was traveling along that root and suddenly some suspected gunmen fired gunshots at them, killing the husband and taking away the wife and their daughter.

“The police have mobilised to the spot and combing the surrounding forests with other agencies like the Amotekun Corps, Nigeria n Security and Civil Defence Corps,local hunters and vigilance group.

“Killing and kidnaping are two evils all of us as patriotic citizens must join hands with security agencies to defeat.

“Those perpetrating these didn’t mean well for our country and we must all perceive them as enemies of this nation”, he said.

A few months ago, the traditional ruler of Ewu-Ekiti, Oba Adetutu Ajayi, in Ilejemeje Local Government Area of Ekiti State, had a close shave with death, as he was shot by bandits on April 10, 2021.

Also on June 10, 2021, two hotel workers in Ayetoro-Ekiti were kidnapped while the hotel security guard, who was inflicted with machete cuts is still recuperating in an undisclosed hospital in the State. 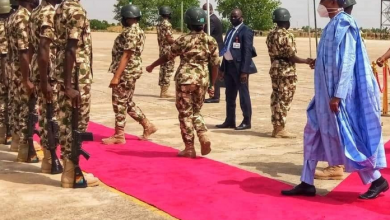