TWO people were presumed dead while others were injured during multiple accidents which occured on Friday, on Odo Iya-Alaro Bridge, Ojota, Lagos.

The incident occurred at about 2.15am.

“It was revealed that the tipper truck lost control while on high speed and ran into the vehicles, thereby resulting in the multiple accident.

“Unfortunately, two adults (a female and male) were confirmed dead at the scene.

“The male adult was handed over to Lagos State Environmental Health Monitoring Unit SEHMU ,at the scene while the female was received by her immediate family.

Free flow of traffic was disrupted in the axis but this was well managed by the authorities concerned.

Road users urged the state government to be proactive in its emergency responses. 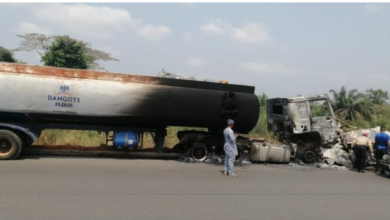