MANY drivers of small buses popularlly known as ‘Korope’ on Monday, took to the streets to protest alleged harassment and extortion by the personnel of the Lagos State Environmental and Special Offences (Enforcement) Unit (Task force).

The protest took place at Agbara/ Igbolerin/Okoko route, along Lagos)Badagry Expressway, where many commuters were stranded for hours.

The drivers, bore placards with various inscriptions which read, ‘End task force wahala’, and ‘End task force in Lagos State,’ as they prevented their members from operating along the axis.

The protest resulted in free flow of movement from Okoko to Iyana Isashi.

Meanwhile, Gbadeyanka Abdulraheem, Lagos Taskforce Spokesperson could not be reached at press time..

Court stops Mc Oluomo, others from issuing tickets at motor parks in Lagos 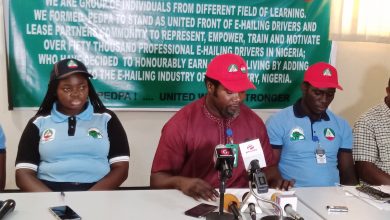