CITIZENS COMPASS– LAGOS State Police Command, Ikoyi Division, have arrested and charged before a Lagos Magistrate’s Court a cleaner and nanny for stealing their employer’s property valued at N9,092,000.

Miracle Phillip Umorem, 27, a cleaner and Mary Effiong, 27, a nanny were accused of perpetrating the act after their employer, Richard Adedotun Adebayo left them on trust at home for work.

The employer was said to have reported the matter to the Divisional Police Officer (DPO) in charge of Ikoyi Division who directed his crack team led by Tony Eigbokhan to fish out the fleeing domestic workers anywhere they might be hiding.

The Police team swung into action and tracked the defendants to a hide out in Lagos and arrested them.

Police counsel, Okete Ejima told the court in the charge marked B/50/2022 that the defendants committed the offence on 1 December, 2022 at Turnbull Road, Ikoyi, Lagos.

Ejima informed the court that the defendants betrayed the trust their employer’s reposed in them as domestic workers and stole his properties valued at N9,092,000 and escaped before they arrested through tracking.

Ejima said the offences, the defendants committed were punishable under sessions 411 and 287(7) of the Criminal Law of Lagos State, 2015.

The defendants, however, pleaded not guilty to the charges and their counsel, Anayo Agbo prayed the court to admit the defendants to bail in the most liberal terms, insisting that the defendants would not jump bail if granted.

The Presiding Magistrate, B.A Sonuga granted the defendants N500,000 bail each with two sureties each in like sum.

Sonuga adjourned the case till 18 January, 2023 for mention and ordered that the defendants be detained at the Kirikiri Correctional Facility, Apapa, Lagos till they perfected their bail conditions. 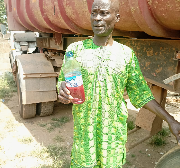 Man arrested for bathing with blood