CITIZENS COMPASS– ALL are not well in Ijagba, Imoru and Arimogija in Ose Local Government Area of Ondo State as residents have fled the areas over herdsmen invasion on their land.

The residents who are mostly farmers have written the state government narrating their ordeal which is likely to cause scarcity of farm produce in the state.

In a ‘Save our Souls’ message to the state government, they claimed that the killer-herdsmen had been terrorising the communities for over two weeks, killing and destroying properties worth millions of naira.

It was gathered that the herdsmen had allegedly been destroying farmlands and crops which included yam, maize and cassava in the affected communities and if the farmers resisted them, they would attack them.

A source in one of the communities on Wednesday stated that the herdsmen who always kidnapped the residents of the community for ransom had warned them not to go near their farms and local plantation.

Consequently, according to the source, many residents had abandoned their homes and relocated from the affected communities to the neighboring towns and villages for fear of further attack.

The source said, “They recently entered into a house and kidnapped a young girl just hours after they released a man from their captive after collecting ransom which was negotiated from N10 million to N1 million.

“For fear of the attacks, some of the residents of the communities have left the area. We want government and the police to save us in this area.”

When contacted, the police spokesperson in state, Funmilayo Odunlami, said the command had not been briefed about the incident but men of the force would be mobilised to the communities to ascertain the true nature of happenings

How we foiled attempted kidnap of Plateau speaker – Police 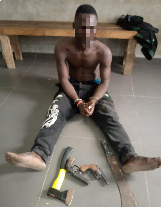