CITIZENS COMPASS– IN what could be described as a Thursday crash, one person was confirmed dead on Thursday, in a fatal accident involving a tanker and a car, on the Lagos-Ibadan Expressway.

The incident occured in the evening, along Kara bridge, inward Ibadan.

As a result, free flow of traffic was disrupted especially from Berger.

On getting to the scene of the accident, our correspondent learnt that the driver of the truck, who was said to have allegedly hit the car had escaped, while a man, said to be his assistant (Motor boy) was being held by the driver of the car and other people.

According to an official of the Federal Road Safety Corps (FRSC), whose team later arrived at the scene, the deceased, a man, was said to be a hawker on the road.

Our correspondent saw the body of the deceased lying on the ground.

The FRSC team noted that efforts were being made to take the body to appropriate quarters. 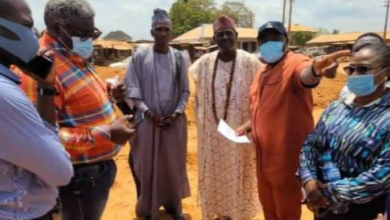