LAGOS State governor, Babajide Sanwo-Olu has released the names of survivors of the collapsed building in Ikoyi, Lagos.

Meanwhile, former governor of Lagos state, Bola Tinubu has called on Sanwo-Olu to probe the incident.

He also asked the governor to punish anyone responsible for the incident.

The survivors are said to be undergoing treatment at the Lagos Marina Hospital.

Recall that a 21-storey building, one of three luxury high rise buildings under construction, collapsed on Monday, November 1, trapping many people including foreigners.

Two days after the incident, the state governor, Babajide Sanwo-Olu announced the names of the survivours.

The governor announced the names while addressing the press during his second visit to the site on Wednesday, November 3, 2021.

According to Sanwo-Olu, six of the nine survivors are currently undergoing treatment while three have been discharged. 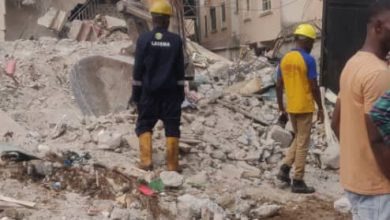